Karuizawa, a well-known summer resort, was just a deserted village until A.C.Shaw built a mountain villa for the summer in 1886.

Soon after people from Europe and America, who could hardly stand the humid summer of Tokyo and Yokohama, began building their summer hideaway in Karuizawa. Naturally there was a great demand for furniture to suit their summer houses. The Americans and Europeans had a fancy for carved wood furniture, so the crafts men of Nikko, known for their most magnificent handiwork in Japan at that time, were called to Karuizawa.

The crafts men's work had a unique harmonization of Western style and of Japanese traditional techniques. This became the prototype for the craft known as the Karuizawa Bori.

Karuizawa Bori is mainly made of “Tochi (a type of horse chestnut)”. Tochi, known for its high quality, is very suitable for making durable furniture.

The designs on the furniture is very characteristic of Karuizawa Bori. “Sakura (cherry blossom)” is a very popular motif, but various other beautiful plants found in Japanese nature, such as “Matsu (pine tree)”, “Take (bamboo)”, “Budo (grapevine)”, Shakunage (rhododendron)”, and “Ayame (iris)” are used as well.

Although the style of the furniture is very suited for the Western life style, there still is a presence of the traditional Japanese wood carving technique, which created the eternally sturdy furniture, and the Japanese artistic taste in them.

We hope you like the Karuizawa Bori furniture which have been developing with Karuizawa as a summer resort.

Icchodo has rich historical ties to Karuizawa as a summer resort area. In 1886, Mr. Alexander Croft Shaw, a missionary from the United Kingdom, built a summer villa in Karuizawa, and invited personal guests, missionaries and diplomats who eventually built their own summer cottages in the area. The boom in housing sparked demand for furniture for these cottages. The founder of the first furniture store of Karuizawa, Kenkichi Shimizu, worked on many of the original pieces of the time. As a master engraver and woodcrafter, Shimizu combined Western advice with traditional Japanese techniques, creating what has evolved into the Karuizawa woodcrafts (Karuizawa Bori) of today. The cherry blossoms, much loved by foreigners, became the central carving pattern for Karuizawa furniture. Continuing with the third generation of Icchodo owners with six other craftsmen, cherry blossoms remain as the main theme, dominating in present day carves. 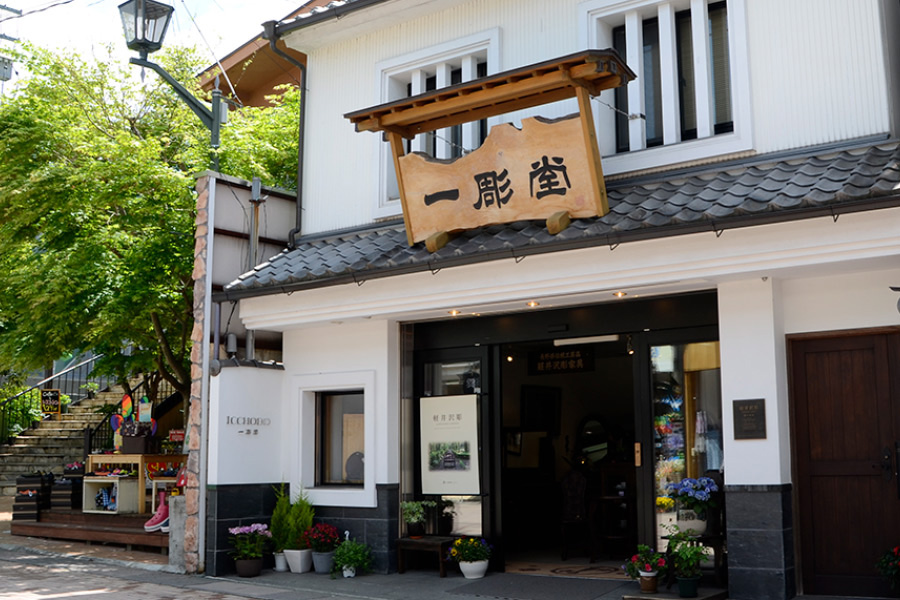